When pilots use an airfield they follow published airfield procedures .  I have been learning how Rothera airfield is used and what procedures arriving and departing aircraft need to follow.

The most basic piece of information a pilot needs about an airfield they intend to use is the magnetic heading of the runway.  They can’t land sideways onto a runway so obviously they need to know what their compass needs to be pointing as they approach the runway.  Because this information is so fundamental it is actually encoded into the number assigned to the runway.

For example Cambridge airport runs kinda east-west.  Approaching Cambridge Airport from the east you need to be heading 230 degrees on your compass to hit the runway directly and approaching from the west you would need to head 050 degrees (180 degrees from 230).  Cambridge runway has therefore been assigned runway numbers  05 and 23. The runway number tells the pilot the heading to approach the runway with.

The  Co-ordinates for the thresholds of the two runways are:

Clever-pants readers might be wondering why the westerly co-ordinate differs for the two thresholds if the runway runs directly on a north south magnetic heading. The reason is

that the co-ordinates are given in True while the runway is given as a Magnetic bearing.  Because of the vicinity to the South Pole there is a significant difference between true and magnetic headings at this latitude. The variation is 21 degrees east.  Maps of Rothera runway will show it   pointing at one o’clock.  But if you stood on the southern  end of the runway a compass  would  point at twelve o’clock.

There is unlikely to be a lot of circuit traffic at Rothera.  But the circuit direction and circuiting procedure will still be important to pilots because they may choose to do a  go-around then come back around circuit  or have a problem such as a bird strike during a take-off and want to come around the circuit and land. 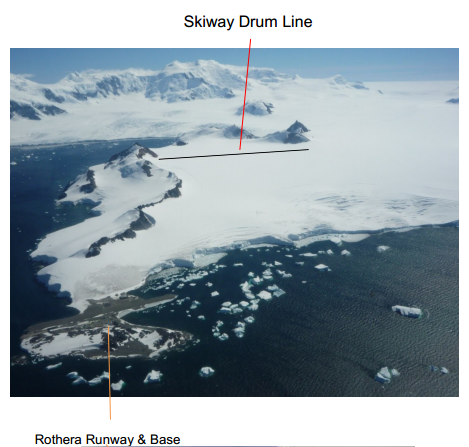 Looking West. Circuit is  on the east  to avoid those mountains.

The local barometric pressure is an important piece of airfield information.  Pilots use this information to calibrate their altimeters .  Without an accurate pressure a pilot won’t accurately know their altitude(bad).  Pressure is  typically provided to pilot as hector-pascals for a QNH (pressure msl) or a QFE(pressure at the runway threshold). 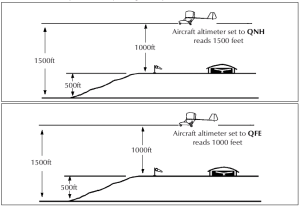 Because the runway at Rothera is only 13 feet above msl there is very little difference between the QFE pressure and the QNH pressure.  The QFE is one hector-pascal lower than the QNH.  So I just looked at the current pressure measurement for Rothera and I can see that it is reading 979 hPa.  From this I know that the QFE is 979 and the QNH is 980.

The VHF frequency 129.7 MHz is for Traffic Information Broadcast by Aircraft (TIBA) in the region.  Pilots will listen to the is frequency and broadcast any pertinent information for other aircraft in the vicinity.

There are various ways aircraft can contact Rothera tower.  Rothera is a prior arrangement only airfield so any visiting aircraft will have phoned  to make arrangements prior to departing.  For long distance contact with Rothera tower from the air  pilots have three HF channels  9106.0 kHz,  7775.0kHz and 5080.0kHz.  Alternatively the aircraft have Iridium satellite phones and could call the tower on 881 631 831 227.  Once closer to the station probably less than 50 miles they should be able to make VHF radio contact on 118.1 MHz from which we would expect a clearer and more reliable connection.  We will be listening on all of those communication links in the tower, so I hope that don’t all go active simultaneously.

The official hours of operation of the airfield are 1100 to 0000 Zulu time, Monday to Saturday, October to February.  Zulu time is UTC and the time offset at Rothera is UTC-3 (P – Papa time). Converted to local time the operation hours will be 0800 to 2100 local time.  But in reality we will work much longer hours than this in the summer if the weather is favourable for flying.