Rothera station is located on rocky point on the west shore of Adelaide Island.  Walking around the point is a very popular way to take a break from the fish bowl life of base.  I try to walk around every day.
The point is crammed with curious science and communication instruments.   I have been trying to find out what the various instruments and antennae on the point do.  Until today that has been achieved by me asking people who I think might know a.bout them.

Today I stopped and looked at the second satellite dish dome that sits behind the VSAT
dome.

Turns out this is the ARIES (Antarctic Reception of Images for Environmental Science) dome.  This dish establishes connections to various polar orbiting meteorological imaging
satellites when they are within range. The satellites take high resolution images of the
region and the satellite dish here is able to receive copies of the images which are used
for weather forecasting and climate research.

The pilots and field operations teams are always eager to receive the latest images to get
an insight in the weather conditions at deep field sites they are awaiting a weather
window to visit.

I came across a curious looking instrument on my walk up to the  Point yesterday and did some investigating to find out what it is.  It turns out to be a cloud height measurer.

The instrument like many others had a connection coming back to Old Bransfield House.

The aircraft meteorology observations require cloud height measurements. This is quite an art requiring an experienced observer.  At Rothera the cloud heights are provided through visual observations by the Met babes. They do however have this clever instrument to help them.

This instrument fires a beam into the sky and determines the height of the of the base of the cloud be the time recording the time for the signal to bounce back.

This is displayed on a terminal in the  Met Office and observers can VNC connect to the server to view the display from anywhere on station. 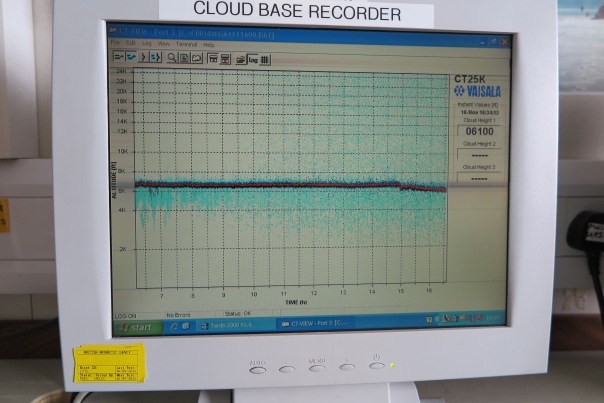 Weather balloon data has been collected at Rothera station for more than 30 years, providing a valuable long term data set for climate scientists. There is an office inside the aircraft hanger where the launched instruments are stored and calibrated and a shipping container behind the hanger where the balloons are inflated and prepared for launch. Balloons are launched every Monday, Tuesday, Thursday and Friday morning by the on-duty Met Observer. Anyone on base can meet up with them at the sign-out board at 8.00am and go and help launch a balloon. On the morning I helped it was Petra on duty.

The rubber balloons are stored in a temperature controlled box in the hangar that keeps the balloons at 60c.   The instrument which attaches to the balloon is called a Radiosonde, it has a GPS to track the wind speed and direction and other instruments to measure temperature, pressure and humidity.   Petra calibrated the Radiosonde to the current atmospheric conditions. She then fired up the data collection software on the PC in the hangar and established a connection with the Radiosonde.  She then took the instrument out onto the apron for a quick walk to be sure the GPS locations were being correctly transmitted back to the data collector.

Once the balloon was released Petra returned to the hangar to make sure that the tracker software was receiving sensible looking data from the balloon. And job done. The data is used by Donald, the local weather forecaster here at Rothera and also sent back to the Met Office in the UK where it is used by modellers and climate scientists.   The data over the past 30 years shows that the temperatures below 8km in the troposphere have warmed and that temperatures in the stratosphere have cooled.  The data also shows that the warming rate at 5km above the surface are three times above the average rate of warming across the globe. 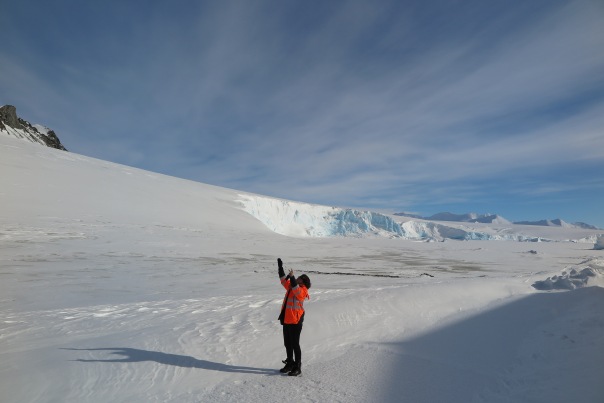 A big part of the job in the tower is passing meteorological observation to aircraft.

Whenever BAS aircraft are flying we collect and pass hourly weather observations for all airfields along the planned and alternative routes for the flight. These help the pilot decide whether to continue with the flight as planned, what altitude to fly at, what find of approach to make when landing. And probably other flying decisions that I don’t know about.

Everyone on base is expected to contribute to keeping the base clean and preparing food.

Generally people will do any jobs that they see need doing, like helping wash up or clearing a path of snow. Gash and Friday afternoon scrubout are the formalised traditions that help keep the base clean and pleasant.

Every Friday afternoon a scrubout roster is posted assigning a cleaning job that would take about an hour to each person on base. Between 5-6pm on Friday everyone on base sweeps, mops, vacuums or scrubs some part of the base. There is a bit of a vacuum cleaner shortage on base at the moment and these are highly sought after during scrubout   hour. In the tower we also use this hour to empty our bins, wipe surfaces and vacuum the floor. Moving food from the storage room in old Bransfield house across to the kitchen in new Bransfield house is another common scrubout job. This is done by forming a human passing chain so nobody has to move. In snow this is definitely the fastest method for manually moving stuff.

Gash is a long held BAS tradition. Everyday one person spends the entire day on Gash.  Gash person spends the day washing-up, cleaning the bathrooms, recycling and helping in the kitchen. An important part of the gash tradition is that at meals time gash-person is always served first. At the start of mealtime a queue has usually already formed in the   dining hall. But only after gash-person emerges from the kitchen and takes their food will the first person in the queue take their food. Newbies be warned this tradition is  taken very seriously.

The day following your gash day you also help with after dinner washup.  The gash job starts at 8.00am and ends at 8.00pm with a break of about 2 hours in the afternoon between lunch and dinner.

Internet bandwidth at Antarctic latitudes is very expensive.  Obviously there aren’t any broadband fibre cables so satellite internet is the only option.   And there are only a limited number of satellites that attempt to provide coverage this far south.

Rothera station has a 2.4m VSAT dish stored inside a radome sitting on the point just behind the base.  The dish talks to the NSS-7 satellite which is a geostationary communications satellite, located in the sky at 0°0′N 20°00′W.  To point the dish antennae at the equator the dish points at a dis-concertedly shallow angle. So low, that if work is required on the roof of one of the station buildings the dish must stop transmitting.

This shallow angle also means that the signal has to penetrate a lot of weather as it glances through the atmosphere for a significant distance. This means that snow and precipitation thousands of miles away from the base can significantly impacts on the service. And it frequently does.
The station telephony system is a Cisco VOIP system that uses the internet connection to carry the incoming and outgoing telephone messages.
So outages cause a disruption to both the internet and telephone system.
Because field parties may try to telephone the station at any time of the night the status of the link is monitored 24/7 by the night watch person. If the link fails in the middle of the night the night watch person will wake up the communications manager.

The modem and codan equipment to modulate the satellite signal sits in a cabinet in the boot room of the Giants accommodation building.  These manage the traffic and the antennae.

The whiteboard in the dining hall at Rothera is always spattered with offers for opportunities to participate in boating, skiing, mountaineering, walking etc.  Yesterday this list went up for visits to the show crevasse. I had heard from others that this was a must-not-miss trip.  I managed to get my name at the top of the list. 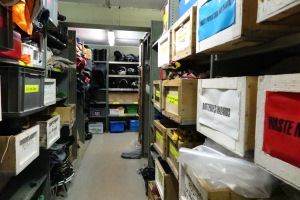 So at 1.30pm after Sunday brunch, myself Matt (mechanic), Sam (electronics engineer), Nick (domestic), Seb, Izzy and Becky (i-Star scientists)  assembled at Fooks house to kit out in boots, cramp-ons, helmets and harnesses.

The weather deteriorated slightly as we walked up the ramp.  We stopped at the top to watch the Dash 7 land on the base runway bringing 12 more new summer crew.

At the entrance to the crevasse Roger attached a rope to the bumper of the parked skidoo and belayed us all down the narrow entrance into the crevasse.

Sam meet us at the bottom of the descent and unclipped us and showed us how to safely navigate within the crevasse chambers. The crevasse has been laid with guide ropes to which we attach. Always attaching a row before detaching from a previous rope. With this system we were to and were able to navigate the crevasse at our leisure. 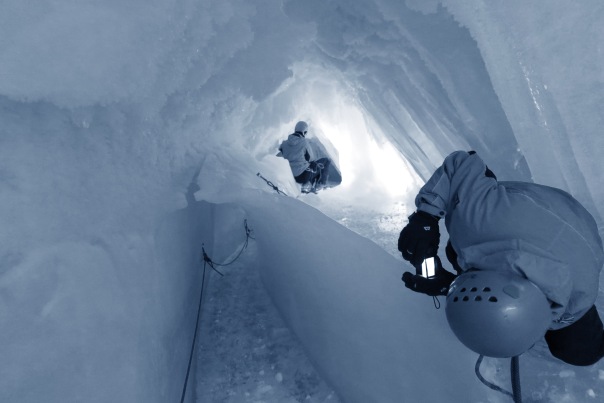 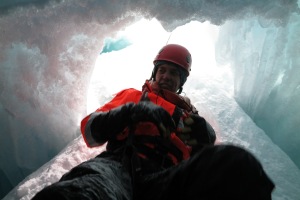 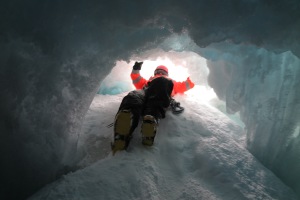 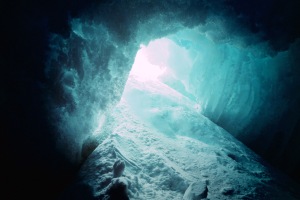 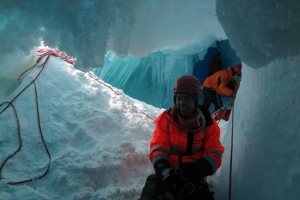