BAS  provide a free mini bus from Cambridge to Heathrow and that would have been the ideal way to get to Heathrow.  But I am taking a huge bike with me too big for a mini bus, so we cycled to Cambridge train station, caught a train to Kings Cross, then followed the GPS to cycled 7km across London to Paddington, to catch the Heathrow Express. So  far five changes and not yet left the UK Cambridge>Stevenage>KingsCross>Cycle>HeathrowCentral>Terminal 5 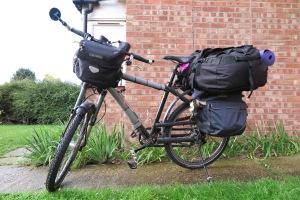 Bicycle included, I checked in more than 50kg of luggage, 22kg in the kitbag, 12kg in my luggage and 21kg for the touring bike.  They tagged the luggage all the way through to  Punta Arenas but told me I would need to collect and re-check it at Santiago for Chilean customs.  I paid £205 in excess baggage which was not  as much as I had expected.

Yes, this is a ridiculous amount of luggage, but in my own defence this is stuff not just for my stay in Antarctica but also full cycle camping touring kit for a post deployment tour in North America. A lot of this stuff I will leave in Punta Arenas while I am south. There were eleven of us from BAS in this group headed for Rothera, with Andy who is heading south to lead a traverse party ably leading our group.

The views over the Andes coming into Santiago made a great way to wake up.

At Santiago I needed to collect all the 50kg bike and baggage and drag it through customs and re-check it for the domestic Punta Arenas flight.  I had been dreading this but I got loads of help from the super lovely people in our group.

We had about 4 hour at Santiago airport before boarding the flight to Punta at 1.00pm.  Even better views of the Andes and Lakes District on this flight.  The plane stopped and did some quick passenger changing Puerto Montt and I managed to nab a whole row if seats, so manage a short sleep.

At Punta the BAS agency staff from Agunsa gave us a friendly welcome met at Punta  airport. They  collected up all our passports and the important little carbon copy slip of paper Chile immigration had given us at Santiago to arrange the immigration exit stamps before the BAS Dash 7 flight tomorrow.  By 7.00pm we were at the hotel and by 8.00pm we were out for dinner.  Chile is on the same time zone as  Rothera GMT-3.

Had a great sleep in the comfy and quiet hotel in Punta.  All being well tomorrow we fly on to Antarctica on the BAS flight.